skip to main | skip to sidebar

Summer Days are Coming to an End 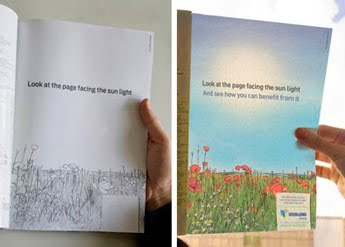 Hopefully their readers are not looking at this magazine at night!

The end of summer is almost here...can you tell I've been busy? I haven't done a new blog entry in ages (oops!). I have had a lot of quality time indoors this summer...when you live in Antelope Valley where temps in the 100s are the norm, you learn very quickly to stay out of the sun.

However, you need the sun to appreciate this magazine ad...it is solar activated (how cool is that?!?). I don't know what inks/paper they use to pull this off, but it is really cool.

Just make sure you are wearing sunscreen when you are looking at it! 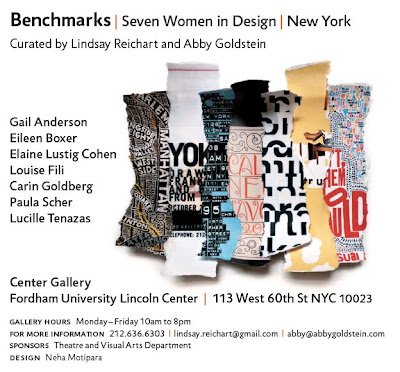 If I was anywhere near New York City, I would definitely attend!
June 10th - Aug. 15th
Posted by Holly at 1:12 PM No comments:

Email ThisBlogThis!Share to TwitterShare to FacebookShare to Pinterest
Labels: Benchmarks, women in design

It was a normal morning. I was drinking my tea while checking my email, and then a screen popped up claiming that I had viruses and I needed to do something about it. Whoa, I've never seen anything like this on my Mac...and I could tell something was up because it didn't look quite right.... 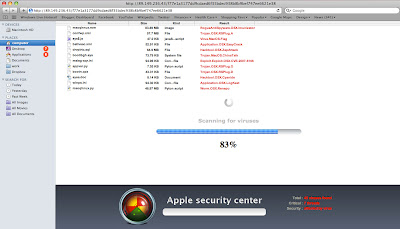 They must've uses some advanced Javascript or something, because it appeared to actually be "scanning" my computer. 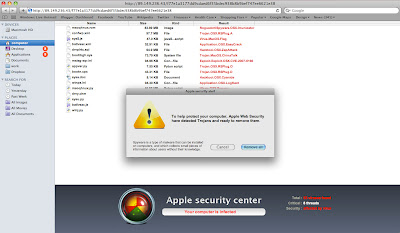 Whatever you do, do not click on it!!!
Did this happen to anyone else? It looked like it was my mail program, but was actually a spyware program running through Safari. I guess Macs are not immune to threats, just be careful what you click on, and your computer will be fine!
Posted by Holly at 10:12 AM No comments: 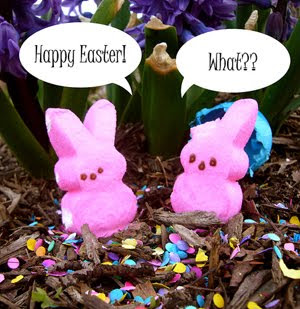 Happy Easter everyone! I hope you all had a wonderful holiday weekend!!
Posted by Holly at 10:31 AM No comments:

What should you do with all of the leftover paper after filing your taxes? Turn it into a work of art! (Hey, if you have to keep these records for seven years, they might as well serve a purpose and look pretty).
Check out these paper sculptures from Nava Lubelski: 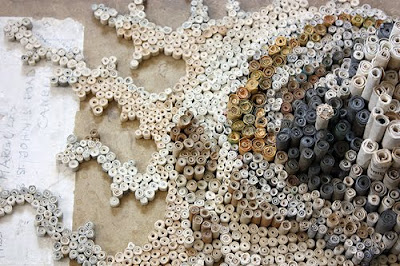 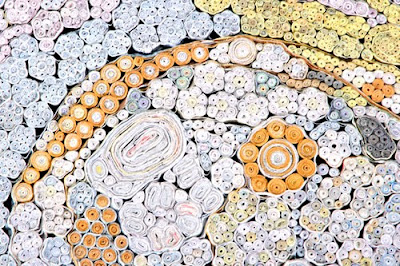 This piece is titled "1997 Tax File". I wish doing my taxes was this beautiful.
Posted by Holly at 9:07 PM No comments:

I got a link to this game in an email newsletter from Veer. My final score was 38 out of 50. There were some I thought that I knew, but I just couldn't think of the title!! Click here to try your luck (I bet you can't beat me!)
Ok, here are the rules: You get 60 second to guess a movie title based on three shock photos having to do with the plot. It sounds easy, but some of them are pretty difficult.
Here are a few examples:

"Hello Clarice..." Can you figure out this one?

If you get this one correct, I'll do the truffle shuffle. 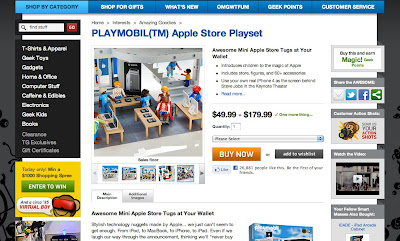 Haha! So many kids would want this toy! I like the mini iPads :)
Posted by Holly at 4:31 PM No comments:

This video is really well done, and raises many questions about life in the digital age. It is a little old (2007), but I think the message still applies today. Take a look, and leave a comment telling me what you think!
Posted by Holly at 1:26 PM No comments: 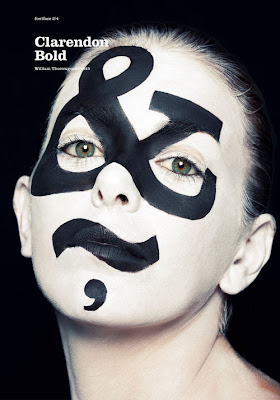 If Cirque du Soleil did a show on typography, this is what the makeup would look like.
I would like to start March off right, with an awesome idea: melding photography, typography and painting. The Spanish studio, atipo, is responsible for these posters, see more here. The website is a little difficult to navigate (my slow internet connection is probably not helping), but the content is really interesting.
Check out this well-made video showing the artist's process, I wonder how long it took??

fontface from atipo on Vimeo. 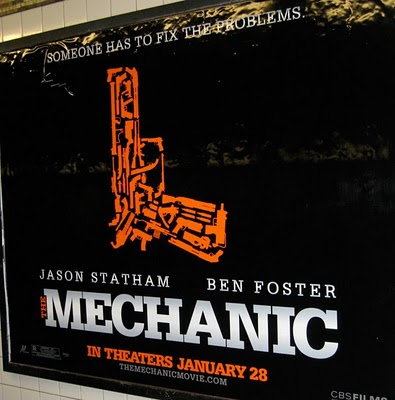 It's a gun!...made of other guns.
I saw a large ad for this movie the last time I went to the theater, and I must admit, it did catch my eye. It is very visually striking...but a little boring, c'mon a gun, made of other guns?? Couldn't they think of something more creative? I wonder how many guns are in the film?
Posted by Holly at 9:05 PM No comments: (Illustration courtesy of iStockphoto)
Happy Valentines Day everyone! I hope you are all having a fun day! My husband and I celebrated on Sunday, a day early. He took me to see The King's Speech (great movie, by the way), out to dinner and to Cold Stone (yum!). I had a great early Vday. Love to you all!!!
Posted by Holly at 4:19 PM No comments: 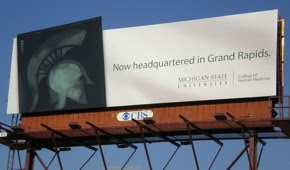 This is a great example of an eye-catching advertisement. The minimal type with plenty of white space makes it easy to read (and the play on words is really cute). I also like how they overlaid the x-ray of the skull over the Spartan logo, genius!
I was recently back in Michigan and I saw a well designed billboard advertising the location of Michigan State University's new medical education and research center. This is the best use of a collegiate logo that I have seen in a long time...good job State! Read more about it here.
Posted by Holly at 1:57 PM No comments:

I just LOVE the typography in this video, and it is interesting too...could 7 billion people really fit into LA? It is a big city, but I didn't know it was that big. You learn something new every day! 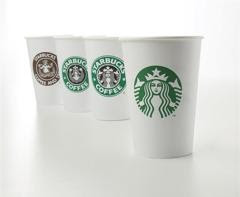 Starbucks is the next company to jump on the minimalist bandwagon. Beginning in March 2011 (coinciding with their 40th anniversary) you will see this new logo at your local Starbucks. They have stripped away almost everything, leaving only the smiling siren in their signature green color. Their new logo has been receiving a lot of praise (unlike Gap, who tried to redesign their logo in 2010, met harsh criticism, and ultimately retracted the change... more).

"The brand is now evolving to a point where coffee association is too confining and restrictive. Starbucks is fundamentally selling an experience, but by no means is coffee the only part of the experience. It is important that they not have a logo that is too confining."

Starbucks has joined the big boys, they no longer need their company name or what they do included in their logo. I like the change, I think it looks updated without going over the top.
Here are some other companies that have done the same thing...some more successful than others...

Ok, I know you guys don't play music on your channel anymore...but did you have to go and chop off the bottom of the logo? Maybe they just put a white rectangle over the words, I guess they didn't care that they cut into the rest of the logo.

The ultimate example of brand identity using no words...just a swoosh.

This one is not so bad either...you don't need to include the word apple, it's obvious.

In my opinion, the before logo is WAY better. The after logo doesn't really read "organic farming"...more like "green space ship, powered by plant material".
Posted by Holly at 11:45 AM 3 comments:

Holly
California, United States
I am a graphic designer living and working in the greater Palmdale, CA area. This is my personal blog. It will be a place for me to talk about my experiences with and ideas about graphic design. I enjoy every aspect of design from observing priceless paintings in a museum, to solving problems in meticulously coded web pages. My goals as a designer are to always strive to become better, learn as much as I can from my colleagues & surroundings, and have fun doing what I love!